Today, while browsing /r/ethereum, I stumbled upon an impersonation attack using NFTs called "sleepminting." I ended up taking a closer look as I wanted to understand the idea of the attack. Here's how it works.

Oh, look, it's beeple's multi-million dollar piece "the first 5000 days" for sale on rarible. Check the screenshot, It clearly says "Creator: beeple." Wow, Metakovan must have gotten badly rekt having to sell that $69M combo-breaker for a handful of WEIs. 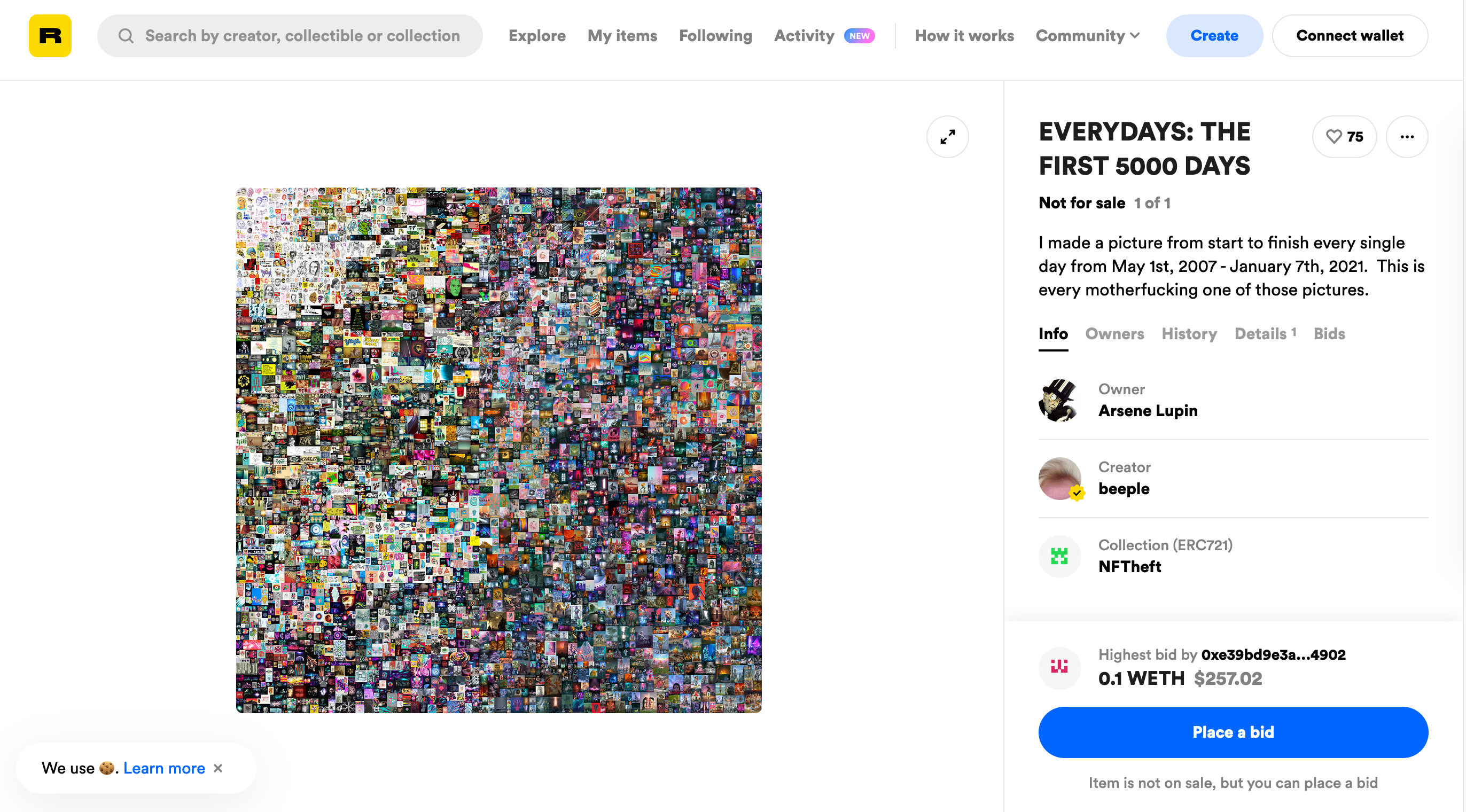 Please don't fall for it! It's a scam. Or shall I saw an art piece? That's right! Its creator, Monsieur Personne, that also goes by the self-proclaimed alter ego The Banksy of NFTs, deliberately minted the piece under beeple's name using a technique he calls sleepminting. Why? Because Monsieur is disappointed in NFTs. So how did he do it?

NFTs are created using ERC-721 smart contracts. They the ownership record of NFTs as a list of pairs. One address and a piece's serial number make up a pair. Like this (I replaced "Bob" with "Booble"):

Upon a sale, Alice can transfer her piece to Boople by:

Now, the list of pairs is updated as follows:

In Ethereum, we don't use clear names for identification but addresses. And we need to sign transfers to authorize them. But in the examples provided in this post I'll use clear names to simplify explaining.

Now, usually developers implement ERC-721 contracts in a reasonable way. As we expect Alice can then only transfer a piece if she owns it and can deliver a valid signature. But what happens if a developer doesn't respect this convention?

See, the ERC-721 standard is just a social contract that defines a interface to allow art platforms to interoperate. There's no criteria for what's a good and what's a bad implementation. As long as a contract's interface matches that of an ERC-721 contract, any machine is considering it as valid.

But, as we've now seen, that can lead to safety issues with NFTs' provenance on Ethereum. It can be tampered with!

As I said, any reasonable ERC-721 contract would allow a minter only to mint to themselves and to only transfer the pieces they own.

But say we customize our ERC-721 contract such that we can mint to other accounts. And say that we adjust the transfer function so that our account can, in a minor exception, also transfer another person's pieces. Well then, we can build a contract that allows us to sleepmint pieces. So as the attacker Malory, we'd do the following: We'd mint a piece with the serial number 1 to Booble:

Now our pairs look as follows:

Then, since Malory has adjusted the contract to transfer the piece with serial number 1 from Booble's account to any other account, she can offer it for sale on an NFT platform like rarible.

As she minted from address(0) to Booble as "Creator: Booble" is displayed.

Once Malory successfully deceived a buyer, she receives her Ethers and transfers the piece to the buyer:

And with that, Malory has successfully tampered with the NFT's provenance record to sell her piece for more than it's worth.

So is this attack breaking NFTs? Should you panic sell your collection of crypto punks? What about poor Metakovan. He rekt now?

I'd say no. Sure, rarible and Etherscan state wrongly that beeple has minted a piece that genuinely he didn't. However, that's more of an interface issue than it is a security vulnerability. Nobody ever had access to beeple's account.

Also, the impersonater can be spotted when taking a closer look at the origin transactions:

Let's take a closer look at these transactions. 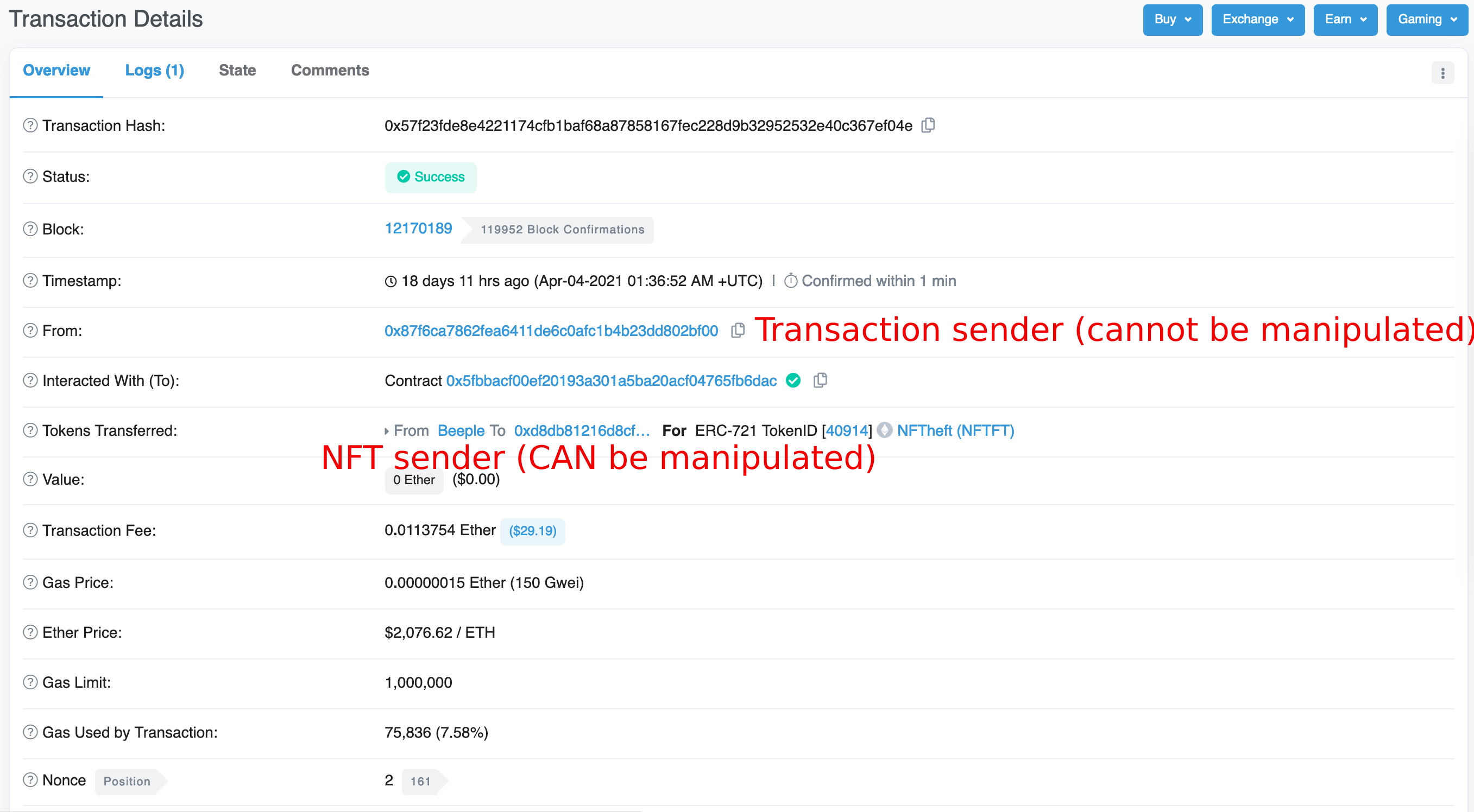 For the mint transaction, we can see that Etherscan displays two "From" fields: One for which msg.sender sent the transaction and another one to state the NFT's sender.

For the transaction's from field, the msg.sender, it cannot be manipulated as it requires a valid signature from the sender's private key. The authorization of the "From" field for the NFT's sender is, however, subject to the smart contract's implementation and, hence, may not display authenticated information.

Simply put, the NFT's sender field could display any data an attacker picks.

Hence, to spot a sleepminted piece from an original, one has to check if both the mint transaction's sender and the NFT's sender match beeple's correct address. If not, it's a fake.

I love this attack. It's similar to rug pulling in that it also plays with the user's trust towards an online identity. We think, now that we use blockchain, all our web2 problems are gone. Every piece of data is authenticated and checked for authorization. But the truth is that these problems aren't gone. They've just shifted somewhere else.

We humans cannot reproduce cryptographic verification in our brains. Sure, we can be extra careful and only trust green checkmarks and lock symbols in user interfaces. But can we recompute hashes of files or the validity of a digital signature? No.

And so the rise of new attacks on web3 is inevitable. I for one am looking forward to learning from them.