I had a huge epiphany moment when in early 2018, Ameen Soleimani et al. launched "MolochDAO," an organization founded on the idea that systemically flawed processes originate from game theoretical failures. It was nice that the summarized the idea as the gestalt of "Moloch": The god of coordination failure, that by the way, loves children being sacrificed. But that just on the side. Here's a picture of a Moloch statue.

The start was a blog post by infamous blogger Slate Star Codex titled "Meditations On Moloch," which I consider a must-read in neo-actuary online literature for crypto-minded moonbois. But for real: "Meditations on Moloch" is indeed a mindblowing post, particularly when you've never been exposed to such ideas.

It'd be foolish for me to summarize or indicate any other greater understanding of its ideas, but I want to reiterate the broader context:

Scott Alexander, the author of the Slate Star Codex, is known to be a rationalist thinker and in their post they make an argument for why some games inevitably lead to coordination failure.

A classic example of such failure can be observed, e.g., the Prisoner's Dilemma. At least, if we were capable of spectating in "god view" upon the situation. I'm not gonna re-iterate the prisoner's dilemma either: But I can say that for a god it's fairly obvious to recommend bilateral cooperation as this results in both prisoners being freed. The dilemma stemming from both prisoners having severely limited capability of collective rational decision making. Here's a flow chart of the participants' choices. 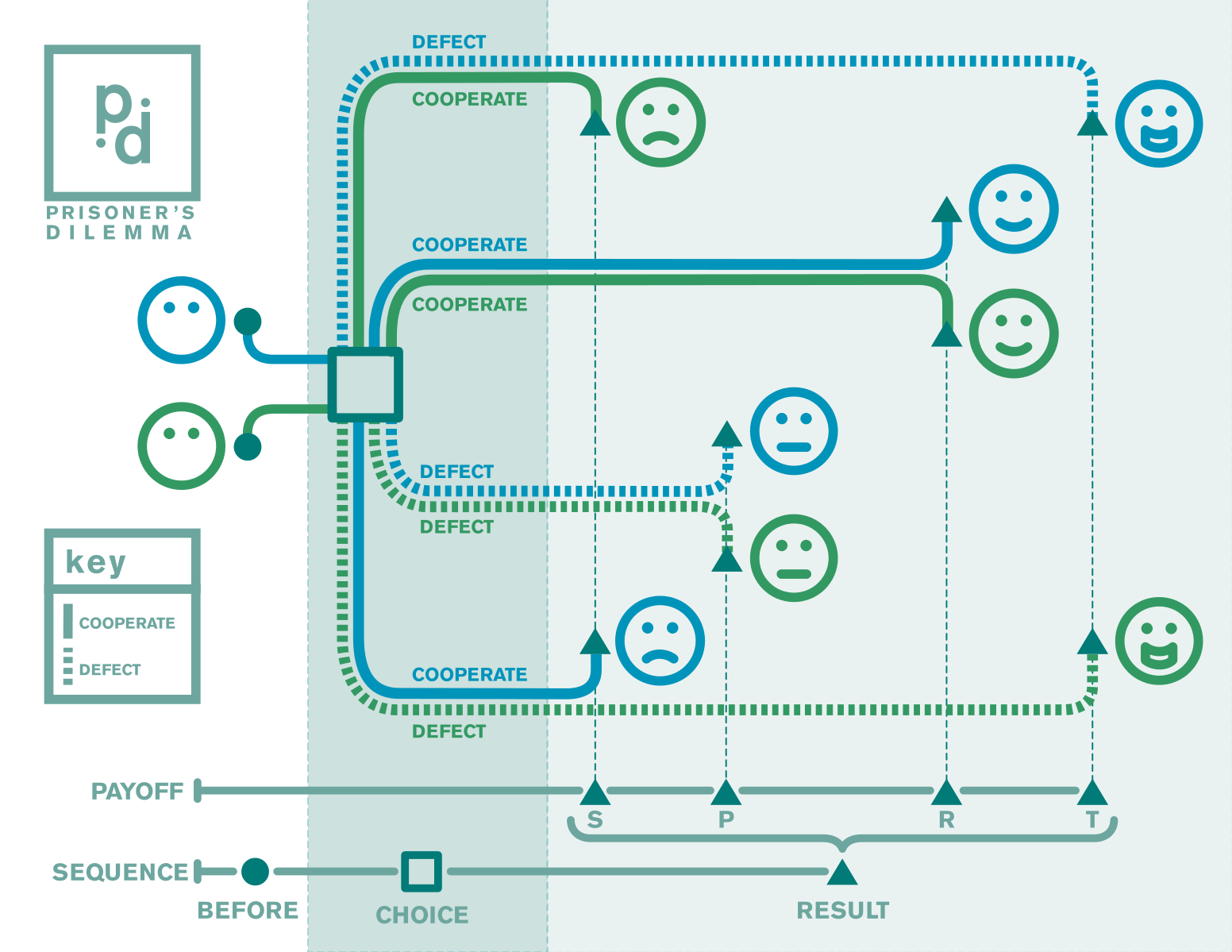 And while the game is deliberately framed to provoke the dilemma, it is a rather practical problem in today's world. It's particularly useful to understand as it highlights other practical concepts we're currently not able to solve, e.g. the tragedy of the commons.

It's because when our decision impacts another number of individuals, then decision-making through individual rationality may not have the same outcomes as through collective rationality.

You can intuitively comprehend this as you too have once been part of such a failure. E.g. when during a presentation you were forced to stand up as others in front of you did so earlier too. Clearly, it'd make sense for everyone to just remain seated - until of course a single person makes the choice of standing for them and all others in the back.

And the avid reader of this blog might now also recognize this type of topic: I've written about similar rationalistic decision-making failure before when I claimed that "On-chain, The Emperor Wears No Clothes."

However, to stay on point hence, when Scott Alexander calls Moloch the god of coordination failure, they're deliberately invoking the devil himself as a scapegoat of collective suffering.

But I wouldn't be writing this post today if it wasn't for rethorically longing for the message I've put in the headline. That "token holders aren't slaying Moloch."

It's because, years ago, the cryptosphere discovered the Moloch-logic as an existential motive of their own and a reassurance of their work being honerable. And it is indeed honerable at face-value solving the great coordination problems of our times. Somehow that work must yield positive outcomes.

However, through working in the space long-enough, I've come to witness that sadly, the Moloch-idea has been wrongly co-opted by the space to further the number-go-up ideal. Or, at least some projects exhibit this type of quality.

I'm not talking about the actual MolochDAO design itself and neither about Ameen's work. But I've come to see the term "slaying moloch" being used by people that say one thing but do another. Maybe not for the wrong intentions; but surely while being on the wrong path.

Actually, I'm happy to double down on my previous claims stating that collectivizing and finanicalizing decision-making isn't a sufficient solution to slaying Moloch. "Being rich or right" isn't "slaying Moloch". Launching yet another token isn't either.

Clearly, as we've understood with Francis Haugen talking, financial collectivism cannot be the solution to a game theory problem like the tragedy of the commons. It's because despite Facebook knowing of the evil it does to people around the world by failing to properly content-moderate in many languages, it still does those things, for profit.

Video language is in english from 32 seconds on-ward...

Here, there's the same coordinatiorial problem as within games like the tragedy of the commons or the prisoner's dilemma. Technically everybody could start participating in Facebook by buying stock and start profiting from all its awesome vision of "connecting people". But it'd also mean being complicit with a company that has been involved in genocide but doesn't really care. Besides, joining financial collectivism doesn't automatically give you reasonable decision-making power.

Clearly, there's still a great misalignment between Facebook, the people of Myanmar, and its stakeholders. Likewise, in the case of the 2016 US election, there was a giant misalignment between some states, Cambridge Analytica, the candidates, and everyone that believes in the US constitution.

I'm not saying that going from individual rational decision-making to collective decision-making is useless: What I'm saying is that using the same old capitalistic tricks is just leading to skeuomorphistic digital capitalism 2.0. Would DeFi-facebook really be better than today's TradFi-facebook? Or is all of that just "same same, but different?".

But then additionally, as I've outlined in "On-chain, the Emperor Wears No Clothes", rationality cannot only come in collective and individual form: It can also be driven by deontic and epistemic ideals.

So really, collective rationality disguised through epistemic ideals can be a trojan horse containing nothing but egoism. Yes, a stakeholder may say things that sound like everyone profits, when in reality they're just a bandit or outright stupid. It's hard to tell but probably not harming Moloch.